Y'all would have seen or read about India vs. Pakistan, Federer vs. Nadal, Kamal vs. Rajini, Bush vs Gore, Sri Lanka vs LTTE, Aamir vs. Shah Rukh, Lion vs. Tiger, Pandavas vs. Kauravas but it's unlikely you're even aware about the great Rama vs. Balaji clash.

Cafeteria is the war zone.

Food is the weapon.

And not-so-humble I am the judge.

Here's a background for those who have no clue what this post is about.

A few weeks ago I visited the SVS [Balaji] Temple in Aurora and feasted on the out of this world food served in their cafeteria. Here is the account of my Balaji experience. 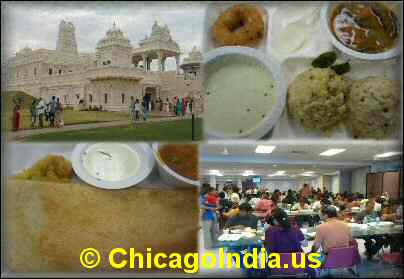 Aurora Balaji Temple
Last week, I gorged on the delectable offerings of the cafeteria in the Lemont Rama temple aka The Hindu Temple of Greater Chicago. You may read my Lemont Rama Temple review here.

With two solid cafeterias near me, I have to do what every idle man does... compare the two and put one above the other for no apparent reason except the sadistic pleasure of putting one down.

Without further ado here is the comparison...

Round 1: The Ambiance and the Crowd

While both Lemont and Aurora cafeterias sport a modest ambiance with only basic facilities for diners, the Aurora cafeteria is much larger - twice as big as Lemont's. This makes sense because the crowd at Aurora is significantly larger than at Lemont.

If the day of the week is Saturday or Sunday, Balaji turns into Rajinikanth and all the South Indian Mamis dress up in Sarees, kids in Kurta Pyjama or Pattu Pavadai and drive down to Aurora to get Rajinikanth's Balaji's Divya Darisanam and importantly the "Prasadham" for lunch/dinner.

It's like a first day first show of a new Rajinikanth movie. No, we're not kidding. You've got to watch it to believe it.

While Lemont also receives a strong inflow of visitors during the weekends, the crowd is like that of a Kamal Haasan movie - sizable but not comparable to a Rajini film. At Lemont, there are more visitors for the programs organized in the temple auditorium than to the temple or its cafeteria.

Another interesting difference is that Aurora's cafeteria is located right at the entrance of the temple.

Visitors have to go via the cafeteria if they wish to have a darshan of Balaji or other Gods.

Lemont Cafeteria is located well inside the temple.

Those visiting only the Siva Temple or the Rama temple or the Auditorium do not have to pass via the cafeteria or even go anywhere near it.

That way the cafeteria is exclusive to those who really want to eat.

On the crowd factor, a large crowd can be eventful but a smaller crowd gives me more space, easy seating and better service. Rama manages to deliver an extra punch on Balaji in Round 1. 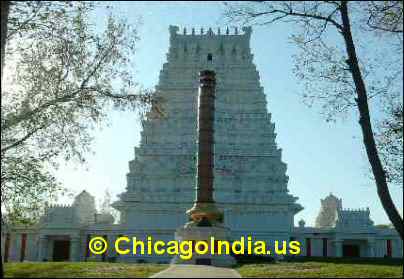 Lemont offers a choice of Plain Dosa and Masala Dosa while Aurora offers Dosa with Masala always served on the side. Those who don't want Masala have no choice except to ask for no Masala, which can be a pain considering the large crowd. Lemon Rice is another item on Lemont's menu that's missing in Aurora.

But, Aurora fights back with Bholi and Indian Coffee, both not offered by Lemont.

Added to that, Aurora's menu caters to the majority of its clientele - South Indians.

Lemont on the other hand has a significant North Indian following as the temple itself is a fusion of South and North styles. But their cafeteria serves nothing but the raised middle finger to North Indians. A shame!

Result: Balaji punches Rama in the gut and takes Round 2. Lemont's menu should be revised to include a few items that North Indians like.

Both cafeterias are self service.

From the time one enters the cafeteria it can take anywhere between 15 to 30 minutes to have the first bite at Aurora during peak lunch /dinner hours. There's a line to buy tokens, then there's a line to collect food and if you are that sinner who ordered Dosa then you have to take a token and wait for your number to show up. If you show up even a minute late then you will have to wait as Dosas take longer than the other items.

The entire process of ordering - billing - collecting food is smooth at Lemont even during peak hours - just one small line. From the time you enter the cafeteria, you could be having your first bite even within 5 minutes. Even in Lemont you have to give your name in case you are ordering Dosas but the wait time was less than 5 minutes. Sweet!

Billing is another area where Lemont stood out. At Aurora, the person at the billing has outright refused to give receipts on multiple occasions. One another instance the swines double billed me and I had to contact them to get that reversed. No such issues at Lemont.

At Lemont, water cups, spoons, paper towels and water cans are abundantly available for patrons. In Aurora, at the time of billing one has to ask for the exact number of water cups and spoons needed. You may even be asked to share cups or spoons by the idiot behind the counter. Also, there are no water jugs at Aurora - only water fountains.

Result: Rama comes right back into the game by landing tight slaps on both cheeks of Balaji

Both Lemont and Aurora do quite ok on hygiene but here are a few observations.

Lemont keeps an open sugar bowl instead of sugar sachets. There are more easily accessible rest rooms in the Lemont temple than at Aurora and also due to the crowd the rest rooms at Aurora are more extensively used. But kudos to the staff who manage to keep it in decent shape.

The one big factor where Aurora gets some extra points is their attempt to implement the "Go Green" initiative. Recently they completely eliminated Styrofoam and moved to paper cups and plates. Lemont is still on Styrofoam.

Result: Balaji recovers from Rama's brutal assault in the previous round.

Coming to the core of the cafeteria.. the food itself. As you may have read in my reviews both cafeterias can be proud of the food they serve.

South Indians in the Chicago region will take either of these cafeterias any day over the garbage served at many of the so-called "Fine Dining" Indian restaurants in the same area.

Still, there are some differences between the two temple cafeterias that did not miss an astute observer like yours truly.

Despite all the good food at Lemont, two factors clearly tilt the scales in favor of Aurora:

2. Overall food temperature at Lemont ranged from cold to lukewarm for most items, which was disappointing. It was like Rama was giving the cold shoulder to his ardent devotees. The chances of getting cold food at Aurora is very low.

The dust settles in the battle field.

Rama and Balaji waged a tough battle and now they meekly await my verdict.

And I declare Aurora Balaji Temple Cafeteria the CLEAR WINNER of this challenge!

Here is why Balaji takes home the Cafeteria trophy:

* They consistently deliver inexpensive, high quality, tasty and hot food to a much larger clientele. All their menu items are good.

* Their menu has what majority of their patrons want while Lemont doesn't have anything for its North Indian patrons.

* They have attempted to be eco-friendly.

But if you don't like to wait in long lines or make a sprint for the tables then the Lemont cafeteria would be a better bet. © ChicagoIndia.us