Besides cultural inclinations what else can lure a non-religious person to Hindu temples in the U.S.?

What else but the thought of gorging on an array of fine food at the temple cafeterias!

For me, a visit to Aurora Balaji temple or in this instance the Lemont Rama Temple a.k.a. Hindu Temple of Greater Chicago is a good excuse to feast on the fine "Prasadhams".

For a long time I was unaware the Lemont Rama Temple had a cafeteria and only recently did I discover the existence of this hidden gem.

A drive to the Lemont Rama Temple is a relaxing experience in itself.

The temple is built on a small landscaped hill (or a large mound depending on how one looks at it).

Rama Temple Lemont
Lemont Rama Temple has multiple entrances including a Gopuram visible from a distance.

The temple has multiple blocks linked via a hallway.

I entered through the Siva temple where the Hindu gods Siva, Parvathi, Ganesh, Murugan, Durga, Aiyappa Swamy and Navagraham are worshiped. This is a spacious hall.

Sometimes you may find yourself getting free Prasadham as you move from this block to the other side of the Temple. Alas, I wasn�t lucky during my latest visit.

On the way from here to the main Rama temple, there is a fine auditorium used for cultural events and fund raisers, a Gift shop, Library, couple of footwear removal area, restrooms, the Cafeteria and finally the Rama Temple.

Radha - Krishna, Balaji, Mahalakshmi, Hanuman, Satyanarayana Swamy and, of course, Sita - Rama � Lakshmana are worshiped in this block. If the Siva temple was spacious then the Rama temple is big enough to host an event.

Lemont Rama Temple campus is very clean unlike the ever-present filth one encounters in temples back home in India.

You can see an interesting mix of North and South Indian styles in the Rama Temple's architecture.

While the interior of the temple shows a North Indian influence, it has an impressive traditional South Indian Gopuram outside.

While a lot of visitors are North Indians, the Priests hail from the South and so is the food in the Cafeteria.

Ah� I finally come to the purpose of my visit... the Cafeteria.

The Cafeteria sports a modest appearance. It just has the basic essentials and a small kitchen.

Thankfully for the diners, although the kitchen is small the food is made with a large heart and a fine taste.

During our visit, the line was short, ordering and billing were quick and the items were served quickly.

There were sufficient tables available during our two visits, on Saturday afternoon and Sunday evening, which are the peak periods. However, sugar was kept in an open bowl instead of a sugar dispenser. This is a hygiene issue. Sugar in an Open Bowl - Unhygienic
The full menu is available only on weekends.

The menu is basic but adequate for a temple cafeteria.

Here's the stuff that made me forget the world and had me in an ecstasy.

The first item my starving stomach and hungry eyes targeted was Idly-Sambar, a South Indian favorite. Lukewarm Idly, Delicious Chutney
Idly was not as warm as I would have desired but the delicious fresh Coconut Chutney and the lip-smacking Sambar more than compensated for the lukewarm Idlys.

Although at first glance it looked watery and unimpressive, a few gulps later I could not get enough of that addictive little bitch!

With a fine flavor and right temperature it was as good if not better than any Sambar I've ever tasted! And hailing from South India, if I know anything in life it's my Sambar. Of course it's the ever reliable Medu Vadai, a spongy delight that after soaking in the warm Sambar had my taste buds in sheer rhapsody. Medu Vadai - Spongy Delight
The caterers at Lemont should be proud of the fantastic Pongal they serve.

To say that the Pongal was yummy would be an understatement but I was not pleased when the "Hot Pongal" was served at lukewarm temperature.

Nevertheless, one spoon of this enchanting stuff sent me into waves of euphoria. This naughty medley was so palatable that I wanted to skip a few other menu items and do an encore. 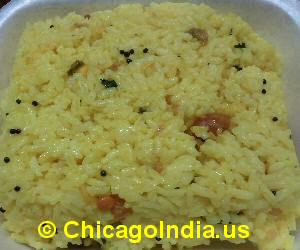 Fine Lemon Rice
Very rarely does Mango Lassi find its way into my list of must have items but the Rama Temple cafeteria's Mango Lassi was truly exceptional.

Creamy in color, whipped frothy and light, sweet but not cloyingly sweet, this Lassi was so good that I greedily slurped three cups and still yearned for more.

Masala Dosai was as expected very appetizing although I personally prefer a slightly thicker crust and a hotter version (temperature-wise)! Masala Dosai - Good but not Great
Curd Rice was ok.

Although it was quite palatable, for me the benchmark for temple curd rice is the exceptional offering at Aurora Balaji temple Cafeteria which ranks several notches above any other curd rice that I have tasted. Curd Rice - OK
This curd rice had excess of Jeera and Ginger that interrupted the flavor of the curd.

After going through the assortment of sweets, I picked Badusha as it is one item I rarely eat.

Man, that was one good decision.

The Badusha wasn�t too sugary but packed enough sweetness in it to qualify as a fine dessert. Now for the Ugly

Here is stuff for which the caterers need a tight slap.

Surprisingly, the Tamarind Rice turned out to be huge disappointment.

It lacked the enticing smell, savory taste and nice feel of fresh Puliohare and coming from a temple cafeteria it deserves to be frowned upon. Dissappointing Tamarind Rice
The lousy Pickle that they provided for 50 cents was extremely unpleasant.

Who would want to taste an utterly bitter thing in the middle of a fine lunch! Bitter Pickles
Masala Tea was too thin and had absolutely no Tea Masala flavor.

After a few sips I abandoned it. Flavorless Masala Tea
By the way, which moron decided that Indians visiting temple cafeteria would have black Coffee?

This was the one item that truly annoyed me among all the items in the cafeteria. A key attraction of eating at a Hindu Temple cafeteria in the U.S. is the low price for most items.

For the high quality you generally get at Hindu temples here, the prices are a steal.

Here's a look at the Lemont Rama Temple menu: Rama Temple Menu
If Hindu Temples can sell their fine fare at such modest prices, why is it that Indian restaurants here try to palm off crappy food at exorbitant prices. The only explanation we can think of is rapacious greed of the restaurant owners and rank incompetence of the chefs.

Despite a few stumbles the Lemont Rama temple cafeteria is a fine place to visit for good South Indian Lunch or Dinner.

Their fantastic Pongal, swoon-worthy Sambar and frothy Mango Lassi amply make up for the few deficiencies I found in some of the other items.

Just in case you're wondering, you don't have to be a Hindu to partake of the cafeteria's many pleasures.

And during your visit if you happen to see an Indian-looking character with a laser-like focus on the third plate of Idly-Medhu Vadai or slurping the fourth glass of Mango Lassi you can be sure that person is yours truly.

Go for it, folks! © ChicagoIndia.us